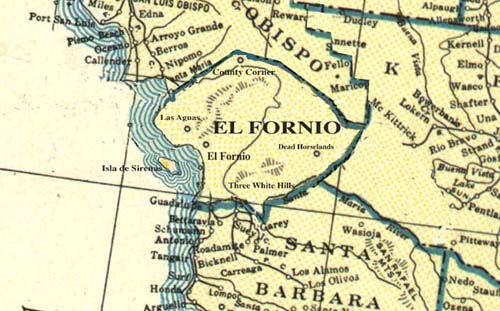 The city and county of El Fornio, California are north of Santa Barbara and south
of San Luis Obispo. Its boundary is the Santa Maria River at the coast, which inland
is the confluence of the Cuyama and Sisquoc Rivers.
Like its neighbors, El Fornio is a Spanish mission town,
established in March of 1776 during Juan Batista de Anza's second expedition
out of Mexico. The mission was destroyed during a rebellion in 1800, rebuilt a year later
and again destroyed in 1806. The name "El Fornio" is said to come
from the hot winds which blow through the mountain passes. Anza wrote in
his journals, "It's like a furnace, even in winter." Some scholars differ, claiming that
the name of the area comes from the name of the local Native American tribe the Fornay.

The island of Sirenas, located just 12 miles from the mainland,
also plays a significant role in El Fornio's cultural and historical life.